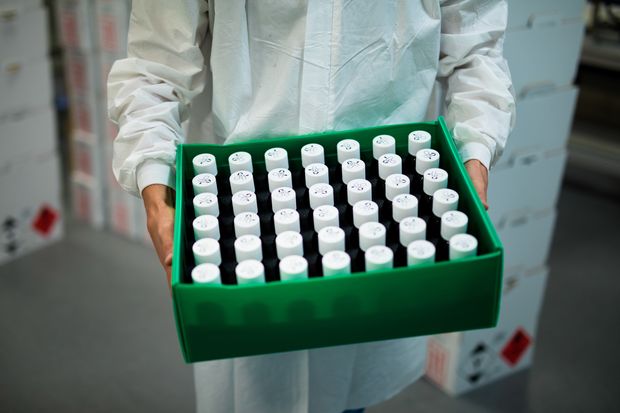 An employee holds a crate of bottles Epidiolex, a cannabinoid-based medicine, at the GW Pharmaceuticals facility in Sittingbourne, U.K. Photograph by Jason Alden/Bloomberg

Ahead of its appearance at this week’s J.P. Morgan Healthcare Conference, GW Pharmaceuticals, the only company with an approved drug derived from cannabis, says that 2019 sales came in better than expected.

The British drug company said on Sunday that its seizure treatment Epidiolex achieved sales of $104 million in the December quarter and $296 million in 2019—its first year of sales.

Its stock (ticker: GWPH) rose 5% on the news, to $113.31. Its preannounced sales for the fourth quarter were somewhat better than predicted by admirers like Guggenheim’s Yatin Suneja, and the analyst wrote on Monday that he came away reassured about his Buy rating after talking to GW’s management.

A rush of Buy recommendations followed the launch of Epidiolex after the U.S. Food and Drug Administration approved it as a treatment for difficult forms of epilepsy. The drug started strong, and GW stock soared to $196 a share, before sinking amid the cannabis sector selloff in last year’s second half.

Yet there is little in sight that is likely to return GW stock to its stratospheric peak. Guggenheim’s Suneja happily noted that the seizure drug’s $296 million in 2019 sales were nearly three times as high as Wall Street forecast at the drug’s introduction. But sales are decelerating. Sales grew 18% sequentially in the December quarter, after a 27% sequential jump in September. Side effects have caused patients to discontinue the drug. And March quarters bring seasonal headwinds for drug companies—the Guggenheim analyst wrote—as payers notch up their discounts in the new year. Suneja expressed relief after GW management told him that they expected modest sales growth in March, rather than a down quarter.

Suneja hopes that GW will get FDA approval to market Epidiolex for an additional seizure disorder around midyear. The company also plans to start clinical trials this year for another cannabis-based drug as a treatment for Multiple Sclerosis and post-traumatic stress disorder.

Even at Monday’s $113 price, GW is no cheap stock. Unlike other cannabis companies, Epidiolex’s developer took the expensive route of running scientific studies for its product. Analysts don’t expect the company to report its first profit until later this year and the consensus forecast on FactSet for 2020 is for earnings of just 8 cents a share.

GW was well-rewarded for its seizure drug’s strong launch. Now, the momentum is slowing for Epidiolex and Suneja says he expects the company to stop giving out details like the number of new patients starting on the drug—when GW reports its full December results on Feb. 25. That is not a sign of strength.

Write to Bill Alpert at This email address is being protected from spambots. You need JavaScript enabled to view it.

Here Are the States Where COVID-19 Is Increasing
healthline.com
Share on PinterestMore than 40 states reported an increase in new confirmed COVID-19 cases this past week. Getty ImagesEditor’s note: This story will be updated regularly as new statistics are released.Daily records continue to be set on a daily basi...
Read More
12 July 2020

Kazakhstan Refutes Reports of Deadly Illness. What to Know
healthline.com
Share on PinterestHealth officials disinfect playground equipment. Getty ImagesHealth officials in Kazakhstan are refuting reports that a new disease is spreading in that country.A report this week from China said there is a new disease that may be d...
Read More
12 July 2020
Here’s What to Know About the COVID-19 Mortality Rate as Cases Climb
healthline.com
Many health experts are anticipating a growth in the mortality rate as a delayed consequence of the recent surge in new cases.It takes time for symptoms and complications of the disease to progress to a potentially life threatening stage, in people w...
Read More
12 July 2020