What Is Trigeminal Neuralgia?? 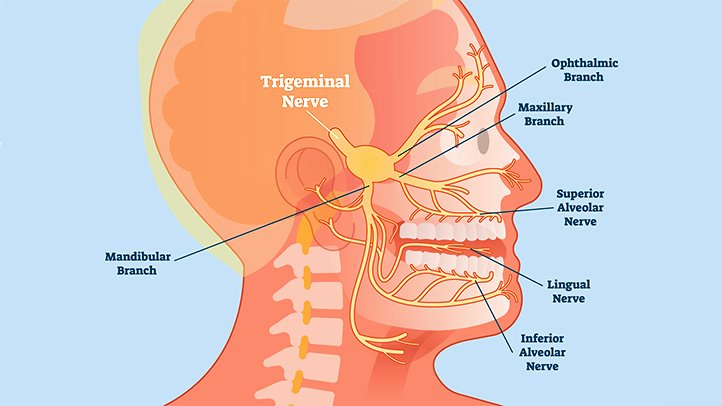 The trigeminal nerve carries sensory information from the face to the brain and also makes chewing possible.Shutterstock

Trigeminal neuralgia is a chronic pain disorder caused by dysfunction of the trigeminal nerve, the nerve that innervates the face, including the mouth and the teeth.

The trigeminal nerve provides sensory information to the brain about sensations like temperature and touch, says Devon Conway, MD, a neurologist at Cleveland Clinic Main Campus in Ohio.

About 150,000 people a year are diagnosed with trigeminal neuralgia, according to the American Association of Neurological Surgeons.
There are two kinds of trigeminal neuralgia, the most common being the typical or classic form, called TN1.
“The nerve starts to dysfunction for one reason or another, and it can cause very severe pain — typically described as a kind of electric-shock sensation — that can last from a few seconds to a few minutes,” says Dr. Conway.
In the “atypical” form, called TN2, the pain is more of a constant aching, burning, or stabbing pain that is somewhat less intense than in TN1, according to the Facial Pain Association.

What Are the symptoms of Trigeminal Neuralgia?

The pain associated with trigeminal neuralgia is usually recurrent and happens on one side of the face, typically in areas of the face where the trigeminal nerve goes, says Conway. “There are three branches of the trigeminal nerve: One is mostly the forehead, one is between the chin and the forehead, and the other is from the chin down,” he says.
“Basically, the patient will have this bad, shocking sensation, which is often triggered by something, though in some situations the pain could be almost continuous,” says Conway. It’s a very severe pain that can sometimes be disabling for patients because of its intensity, he adds.

Who Is at Risk for Trigeminal Neuralgia?